Free Shipping on orders $49+ in Contiguous US

Free Exchange or Refund if any quality problems within 6 months

This is not a filter! 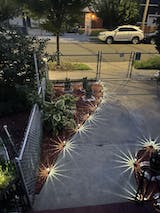 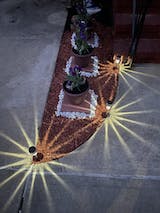 The pictures of these lights does not do them justice!!!! They project an awesome star like pattern and are so bright and beautiful!!!! 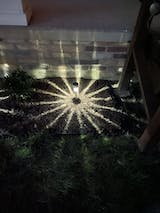 I trust this Brand. I've purchased 3 items from Gigalumi. Great Product and Support. Had people over last night and they loved the lights. 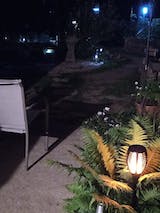 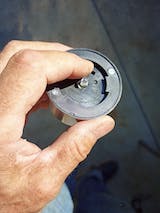 Out of a pack of 12 lights, two were defective and non-functioning right out of the box. The rest of them work fine, and in fact were still going strong when I left to work at 6:00 the next morning, so I was impressed with that. There's an on/off switch you have to access by twisting the solar part off of the lamp part. I kept them switched off while I allowed them to soak in the sun for a few hours. Once the sun began to set, I switched them all on. I can't speak for the longevity of these since I just had them delivered yesterday, but so far I'm very happy with the ones that are working. I tried to give the company an opportunity to correct it before I left a review, and if they had, I would have given 5 stars, but I can't even reach them. When I clicked on the link in Amazon to have a defective item replaced, it took me to another website where I filled in an online contact form, but the submit button was non-functioning. And I could not find a phone number anywhere. So there seems to be no way to reach the people that would be able to replace the two defective lights. I get that sometimes things are just defective, but I just wish I had a way of reaching a customer service rep who can get those two bad ones replaced.That aside, even the 10 good ones I have are worth the money spent IF they last and are weather proof. They haven't been through rain yet, so we'll see. If they fail after the first bit of inclement weather, I'll update the review. And if the company sees this review and reaches out and replaces the bad lights, I'll update the review for that, too. Would I recommend these or buy them again? Yes, at this point I believe I would, since I have 10 good lights that were worth what I paid. Just be aware that you may or may not get a couple of duds in the batch, and if you do, you'll have trouble finding someone to resolve it.In the photos, the night picture with the most ambient light was taken with flash while the other two were taken without flash. The day time picture is just too show how unobtrusive they are. We're still working on adding boulders and plants to the rick gardens, but even with the surrounding landscape being somewhat bare, they don't stand out too much. I tucked them pretty deep into the ground because I only wanted the light exposed, but none of the post. I bought the cold white and love the nice, clean, crisp look, and it makes our very dark walkway leading up to our front door much safer at night since our neighborhood is quite dark. I didn't want anyone tripping over the wood borders of our rock gardens that line the walkway on both sides, as my daughter often gets fast food or Chinese take out delivered after dark. Safety was the main reason we purchased, but they look beautiful, too, and really dress up the after-dark curb appeal. 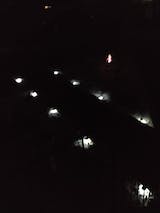 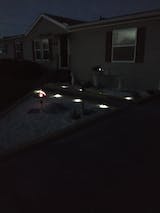 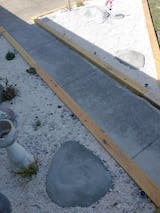 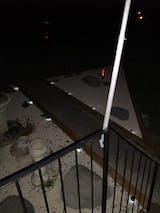 I love these lights.They even came charged.They stay on all night.

I think the light given off in picture is a little off. But I do like them. Pics above. One before sunset. One after. 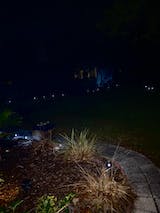 A
ALAL
A beautiful addition to the front yard

I got these looking for an inexpensive, low maintenance addition to the front yard. Adding some simple lighting can improve the front yard appearance by quite a bit. These lights came nicely packaged, and setup was ridiculously easy - just unscrew the top to turn the light on, put the stakes into the metal cylinder, and stick in the ground. The instructions said they need some time to get a full charge to reach full brightness, but they already were looking good on the first night they were in place. They have a very elegant stainless steel type appearance to the light housing, and the light is a pleasant cool LED. You can see from the photo that these lights aren't going to completely light up your entire pathway, but they do provide functional illumination. All in all these are low cost, high style, and high function. 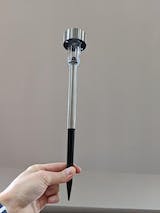 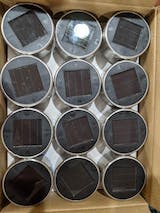 J
Jen B.
No bright at all

Easy to put together and pretty easy to stick in soft ground. They do not give off any light at all. Even after sitting in direct sunlight for about 8-10 hours.

I love solar ANYTHING! These worked great for the first 2 months. Now they come on at dusk and last about 2 hours at the most. In the beginning they lasted practically from dusk to dawn.I am sad they already keep their light on now.