I used pushing to put it on my wall but came with screws and fasteners. Was pleasantly surprised that these are white and not yellow. These are really beautiful in the night. So far holds good charge.

K
Kim Knoll
They do the trick.

Update: After I wrote my review they reached out and sent 4 replacement lights. They are all working and provide good lighting in the yard.I never write negative reviews, until now, and it's more about poor customer service then it is the cheaply made product. I bought two sets of these - one was missing a set of screws - which is a pain more than a problem. When I opened the second box, after having 11 of them up, one of the lights had broken casing, so I reached out to the email on the card (which offered a discount for a review) to ask what they would do to make this right. The first email came over two days later - asking for a picture, I immediately sent one. Then after another two days, they responded offering to reimburse me for one light. I asked if they'd discount another box, because the reason I ordered two boxes is because I need 16 of them. Because I already had 15 of them up and didn't hear back right away, I ordered an additional box - which - go figure - one light doesn't work at all. The message I received today asked me to buy ANOTHER box and then they'd reimburse me 20% ... so four boxes at $37 each - when each box had a different problem, for an $8 discount, no thank you. For the price - they should be at least a little better quality and at minimum better customer service.

E
Emma Morales
They are very bright but not over powering

Your browser does not support HTML5 video. 聽Just put them and they look great

C
ChristinaT
Nice but not a lot of coverage.

Nice lights. Easy to install, but basically just shines a light straight down and doesn鈥檛 provide much light. Was hoping to see my dogs when it鈥檚 dark, but it鈥檚 to concentrated to one spot.

Very pretty when fully lit. There is a white film that developed in top of the lights after a season outside. So far it has not disrupted the lights at night.

Been looking around for lights for the columns on the front entrace and finally found one that fit the decor and that just works. These are pretty good for the price. Nice white light. No issues with charge even when cloudy. They are plastic so very light. Totally worth to get more. 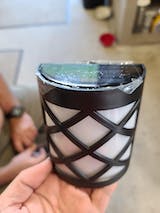 a
ann stewart
All lights on! 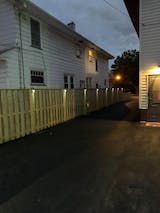